After three years of research, puzzles to solve, investigations on bases, deciphering… the mystery has finally been solved: Formidine Rift. 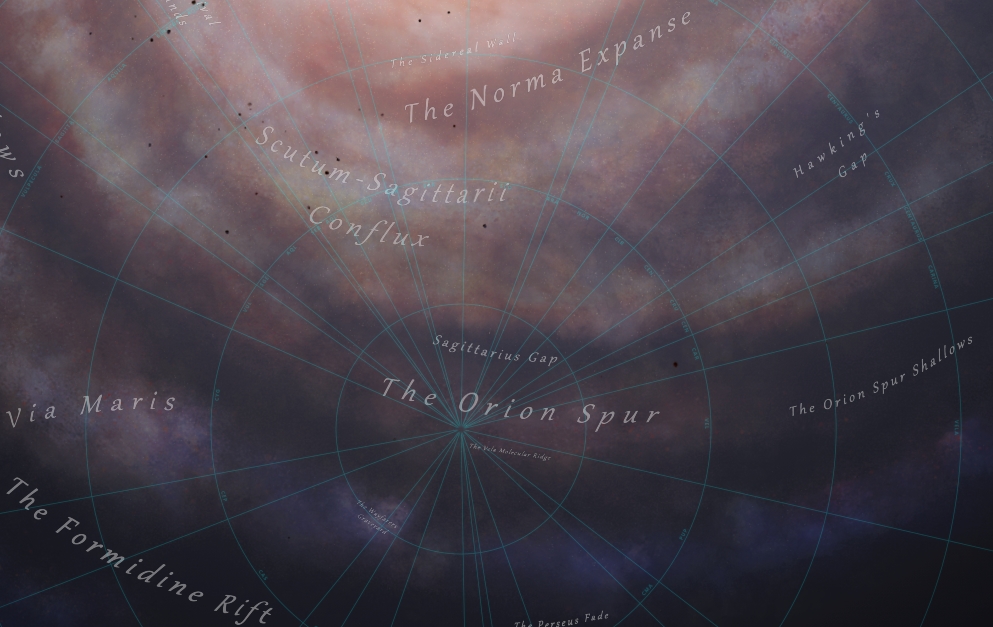 The mystery of the Formidine Rift finds a genesis in Drew Wagar’s Oolite Saga. The third installment of this saga makes a reference to the ‘Formidine Rift’ where we read that, “Thargoid incursions into the Formidine rift appear to be increasing dramatically.” Oolite is an unofficial remake of the original 1984 game Elite and share similarities to the Elite: Dangerous universe. Though there are many similarities there are also plenty of differences. Drew Wagar readily admits that the Oolite Saga is a work of fan fiction.

The Formidine Rift became an official part of the Elite: Dangerous universe when Drew was given the opportunity to write an official novel as a companion to the game. Drew has confirmed that the developers included the Rift and a mysterious something to be found inside it in the game and that this something has been present since it was initially released.

During the adventure Kahina, while suffering from amnesia and using the name ‘Salomé’, meets an old Elite Commander who tells her of a place known as “The Formidine Rift”. She didn’t disclose too many details… just the description that the Rift is located somewhere near the ‘edge of the galactic arm’ and a simple line in space drawn through the systems of Reorte and Riedquat and beyond points to the location of the Rift. Later in the novel Kahina hacks into a video archive made by the lady when she was younger and discovers that there is something out there that GalCop, the Federation and the Empire were all trying to keep secret from the rest of the galaxy.

Salomé, in her ship

This is a big piece of history that I can not fully detail. The decrypted messages of the Formidine Rift, Conflux and Hawkin’s Gap sites can be found below. Three destinations of the Dynasty expedition. 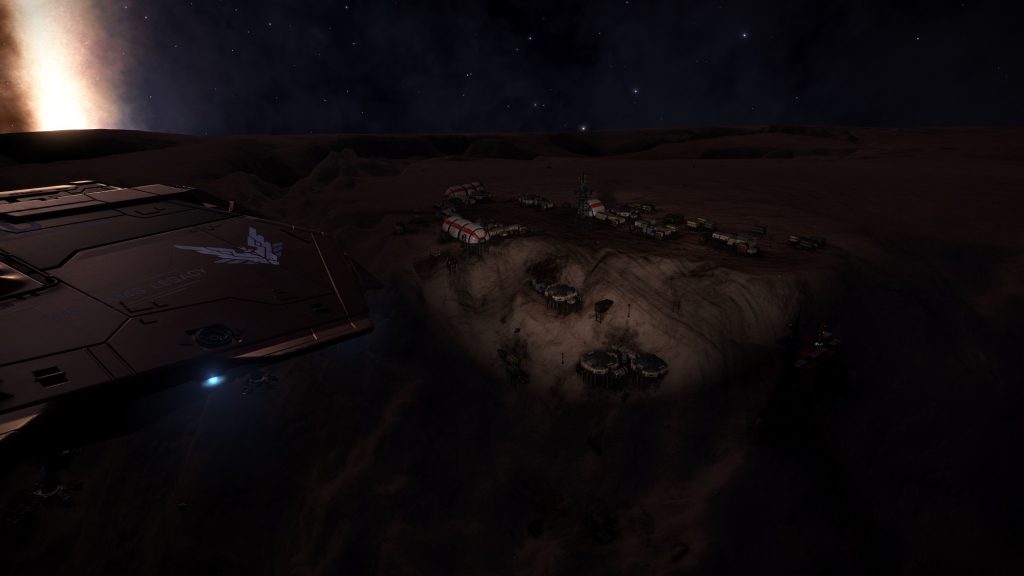 Several independent media outlets have received various holotapes from the mysterious organization, known as the Children of Raxxla, which provide evidence of the fate of a derelict megaship within the SYREADIAE JX-F C0 system. The holotapes provide telemetry and video recordings of the vessel as well as a message;

CoR Intelligence has decoded the Tionisla riddle, which provided them a system name. Upon that, a scout wing led by Commander Jackie Silver was immediately dispatched across the Formidine Rift to investigate. Upon arrival and investigation, we have determined this ship was part of the shadowy dynasty expedition. We believe the loss of the ships crew was an intentional act on the part of whomever launched the dynasty expedition based on evidence found at the site.”

“We are not asking you to believe us on our word alone, we ask each and every independent pilot who believes that the truth is out there to investigate for themselves before this is covered up by those who wish this not to come to the light of day. In this we have provided the system’s name, the ship’s telemetry and all the data we have been able to gather so far to various media outlets.”

The Tionisla riddle has been published on the 16th of April. The hints led us to various researches; In the end, we found these names:

Taking each starting letters, we then get : SRYERBEEACDCIAAEJXFC0 // “REBECCA” is cancelled out, leaving us with “SYREADIAEJXFC0“, which is : Syreadiae JX-F c0. 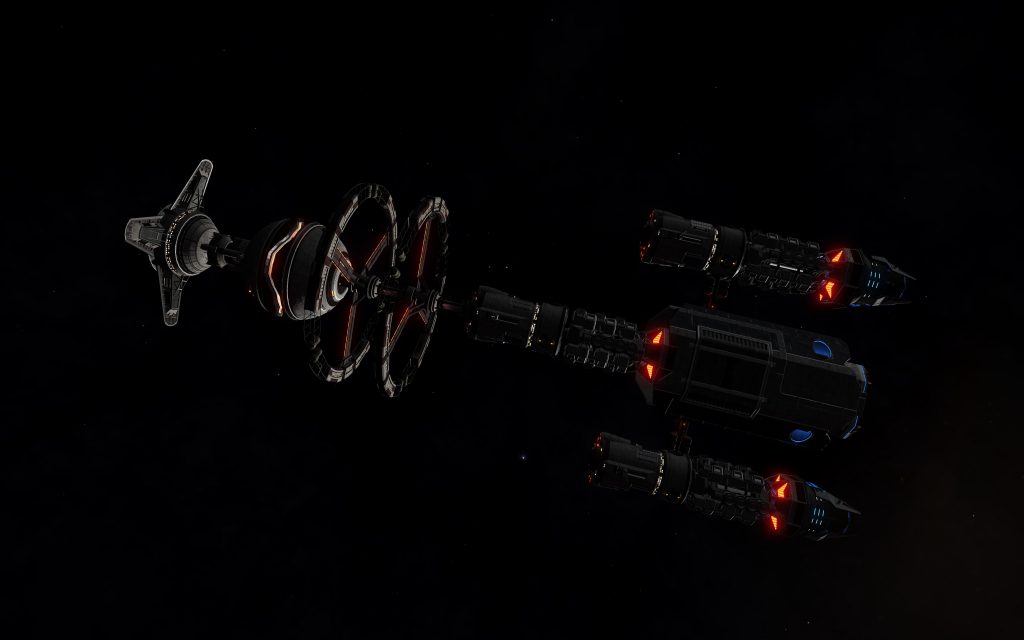 ▲ Four logs have been discovered here

We managed to overpower the invaders. but not before they took out the main reactor. We’re dead in space. with twenty minutes of life support left. Didn’t get nothing out of them before they died, but clearly it was all planned. They took a drug which killed them. Doc says it’s nicknamed ‘Hexedit’. First it kills your memories, then it kills you. Neat and tidy.

So we’re dead, just waiting for the end. This will be the last log from the Zurara. Some of the crew have already killed themselves. Others are praying to whatever deity they believe might help them. A few are drinking themselves into oblivion. I don’t know what will get us first the lack of oxygen or the cold. Battery power is about to die.

Me? I’m leaving this log. This far out I doubt anyone will ever hear it, but well, what the hell?

We all signed up for the promise of big payouts, a year of your life in exchange for enough to retire on. I guess I should have looked closer at it, but you would have probably done the same, right? No need to work again. What’s clear now is whoever was behind this mission never intended for any of us to come back.

The folks managing the cargo, jees, they were all psychos. The moment we completed the mission they just ‘snapped’. Killed the ship and killed themselves. Some kind Of mental conditioning. Doc said. We tried to get word out to the other vessels when we found out. We got a signal out. but I don’t know if anyone received it. It will probably freak them out. I don’t think they know we’re
here.

We dropped a series of beacons out here, all targeted around Earth-like or terraformable worlds We prepped some of the terraform candidates with seeders and biofilters. No one can figure out why it was necessary. but that was the mission. Just as we were turning back…  boom, those cargo-handlers went nuts.

Male crew member, out of breath

So that’s it. We don’t even know why we’ve been killed. But someone out there knows. someone out there has blood on their hands, a lot of it. If you figure it out. give them a message from us. You know what I mean.

Funny. We were told there was something bad out here, that it was haunted by ghosts…  I just never figured it would be us doing the haunting…

So this is what they were hiding. I’m leaving the old logs for reference. I might need to come back this way again and re-educate myself. Chances are my memory will get zapped again. If I don’t make it I’ll have to leave clues for others to follow. So, if you’re reading this and you’re not me, here’s the deal…

Found this ship. Took me years. This is the evidence. Nothing inside but void-frozen cadavers, perfectly  log. They sent these poor souls out here because they needed waypoints. all prepped for every eventuality. Three different zones it would seem.

There’s a conspiracy. Guess you figured that out already, but it goes way up, way beyond the Feds, the Imps and the Alliance. Something is coming, don’t know what it is. but it’s bad and it’s all being hidden. All this weird stuff far out in the void? It’s some kind of continuity plan. The answer to why and who is back in the core, not out here.

That’s where I’m going next Wish me luck.

What do you think of these discoveries? What are the Superpower hiding?